My sister and I have been big Harry Potter fans since we were little kids, so when it came to her 20th birthday party an HP desert was definitely in order. I had A LOT of free time on my hands, so I thought “go big or go home” and decided to undertake an insanely complicated, completely nerdy, and ultimately delicious project. The idea was based on the house cup – each Hogwarts house would have a different flavour of cupcake, the cupcakes that got finished first at the party would be declared House Champions and live forever in eternal glory.

Making cupcakes is actually insanely easy – most cupcakes have the same base recipe that you can tweak to make completely new flavours.

Base Cupcake Recipe:
225 g softened unsalted butter
225 g caster sugar
225 g sifted self-raising flour
1 tsp baking powder
4 eggs
Preheat oven to 175 °C
Beat all ingredients in a medium bowl with an electric whisk for about 3 minutes or until the mixture is smooth and pale.
Place 18 cupcake cases into 2 regular muffin tins. Spoon the mixture evenly into the cases.
Bake cupcakes for 20 minutes.
Remove tins from oven and cool in tray for 5 minutes, before cooling completely on a wire rack

And the winners are…

...and power-hungry Slytherin, loved those of great ambition…

Slytherin…the house we all love to hate. The cupcakes obviously had to be green and the only thing I could think of was mint, which coincidently I hate about as much as Voldemort hates Mudbloods.

To make Chocolate-Mint Cupcakes add 4 tbsp of cocoa powder and 1 tsp of mint essence to the Base Recipe. These cupcakes are best iced with mint butter cream icing: Beat together 115 g of softened unsalted butter and 225 g of sifted icing sugar until smooth then stir in 1 tsp of mint essence.

Obviously we needed snakes on these bad boys, leading me to annoy everyone at the pick-and-mix counter by sifting through kilos of gummy snakes to find the green and silver ones. I wound these into the curls of the piped icing, which I had coloured green. At the last minute I decided to add dark green sugar crystals, because I thought they looked like the emeralds from the house hourglass.

For the Gryffindors we needed a cupcake that could prove their bravery and as we couldn’t put them at the bottom of a frozen lake I settled on chilli. Chilli-Chocolate Cupcakes are delicious – that little bit of spice adds a whole new dimension of warmth, like using incendio in your belly.

To make Chilli-Chocolate Cupcakes add 4 tbsp of cocoa powder and 2 tsp of chilli flakes to the Base Recipe.  These cupcakes are best iced with with a basic chocolate butter cream icing: Beat together 175 g of sifted icing sugar, 50 g of cocoa powder, and 115 g of softened unsalted butter until smooth.

The cupcake decorations were based on the Gryffindor emblem. I crafted large G’s out of white fondant and painted them with edible gold paint. At first I tried adding these to all the cupcakes, but it looked too boring and repetitive (and a little like I was obsessed with Sesame Street’s letter of the day). So I changed my plans at the last minute – I created red and gold shields out of fondant and stuck on a store bought sugar-lion. I coloured the icing red and out of pure luck the combination of the brown icing and red colouring created a very authentic maroon colour.

Delicious cupcakes certainly, but 2 tsp of chilli in 18 cupcakes is hardly cause for bravery, so I had to up the stakes and thus was invented Chilli-Cupcake roulette: 5 of the cupcakes were simply tasty, harmless treats, 1 however was spiked with 3 tablespoons of chilli flakes. Once they were iced no one could tell which cupcake was which and you just had to take your chances. The poor man that eventually ended up with the anathema proved himself to both be very brave and a bit of a crier.

…those patient Hufflepuffs are true, and unafraid of toil…

Poufsouffle is my sisters spiritual (and Pottermore official) house so I deferred to her favourite flavour: banana. In fact I liked banana as a choice, it embodies the softness and sweetness of the astro-puffs. Also, ironically, these cupcakes were the ones that required the most hard-work.

To make Banana Cupcakes add 225 g of mashed bananas and 1/4 tbsp of nutmeg to the Base Recipe and omit the baking powder.  These cupcakes are best iced with a cream cheese icing: Beat 200 g of cream chess until soft and smooth; then add 175 g of sifted icing sugar, 1 tsp of lemon juice, and 1 tsp of vanilla and beat again until smooth.

Decoration choices were easy to think of but very hard to make (my imagination is far more talented than I am). I drew a cartoon badger on a piece of paper, then individually cut out the head shape, stripes and eyes. I then transferred this stencil onto black and white fondant using a very sharp knife to cut around the outline. I then reassembled the pieces to make my friendly little fondant badgers.

…and only those of sharpest mind, were taught by Ravenclaw…

Ravenclaw is the house of my people and also the most difficult flavour choice. I thought for a long time about how I could make a cupcake smart – even the internet could not yield me a brain flavoured cupcake. So, I took it upon myself, as a proud member of the Claw, to just give up completely and make my favourite flavour of cupcake – salted caramel and chocolate.

To make Chocolate Cupcakes add 4 tbsp of cocoa powder to the Base Recipe. I didn’t have a recipe for Salted Caramel Icing so I free-styled it:  Salted Caramel Sauce: Heat 3/4 of a cup of sugar and 1/8 of a cup of water over medium heat, whisking until the sugar has dissolved. Once the mixture reaches the boil, stop whisking and let the mixture boil until it is dark amber. As soon as it is this colour add 3 tbsp of salted butter and whisk until it is melted (seriously, this step has to be done very quickly otherwise it will burn and you will have to start again). As soon as it is melted, remove the mixture from the heat, wait ever so slightly and then add 1/2 a cup of cream. Whisk until the mixture is smooth (it will bubble and splutter ALOT, don’t worry). Let the sauce cool.  Salted Caramel Icing: Beat a 1/4 of a cup of softened butter and 1 cup of icing sugar until smooth, add 3/16 of a cup of the completely cold caramel sauce and whip until fluffy.

For the decorations I wanted to recreate the Ravenclaw Eagle – so I cut off the muffin top, and cut it in half to create two wings – basically a butterfly cake. I then iced the flat topped cupcakes with the icing (which I had coloured blue) and drizzled it with some extra caramel sauce and sprinkled the tops with sea salt flakes. I then added the ‘wings’ to create my bird.

Now, I know what you are thinking – a party with Harry Potter themed cupcakes, that must have been a wild night…. Well actually, I will have you know that we ended up having the police called…at 11pm..by our 90 year old neighbour who deemed we were playing Hits of the 90s too loud. So… yeah… hard core. We gave the cops some cupcakes

Cupcakes were inspired by and adapted from those in 500 Cupcakes (F. Connolly) 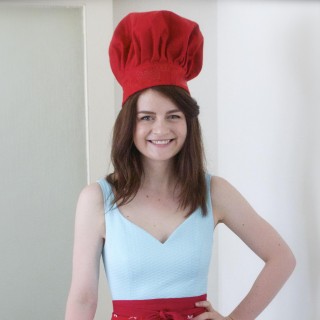